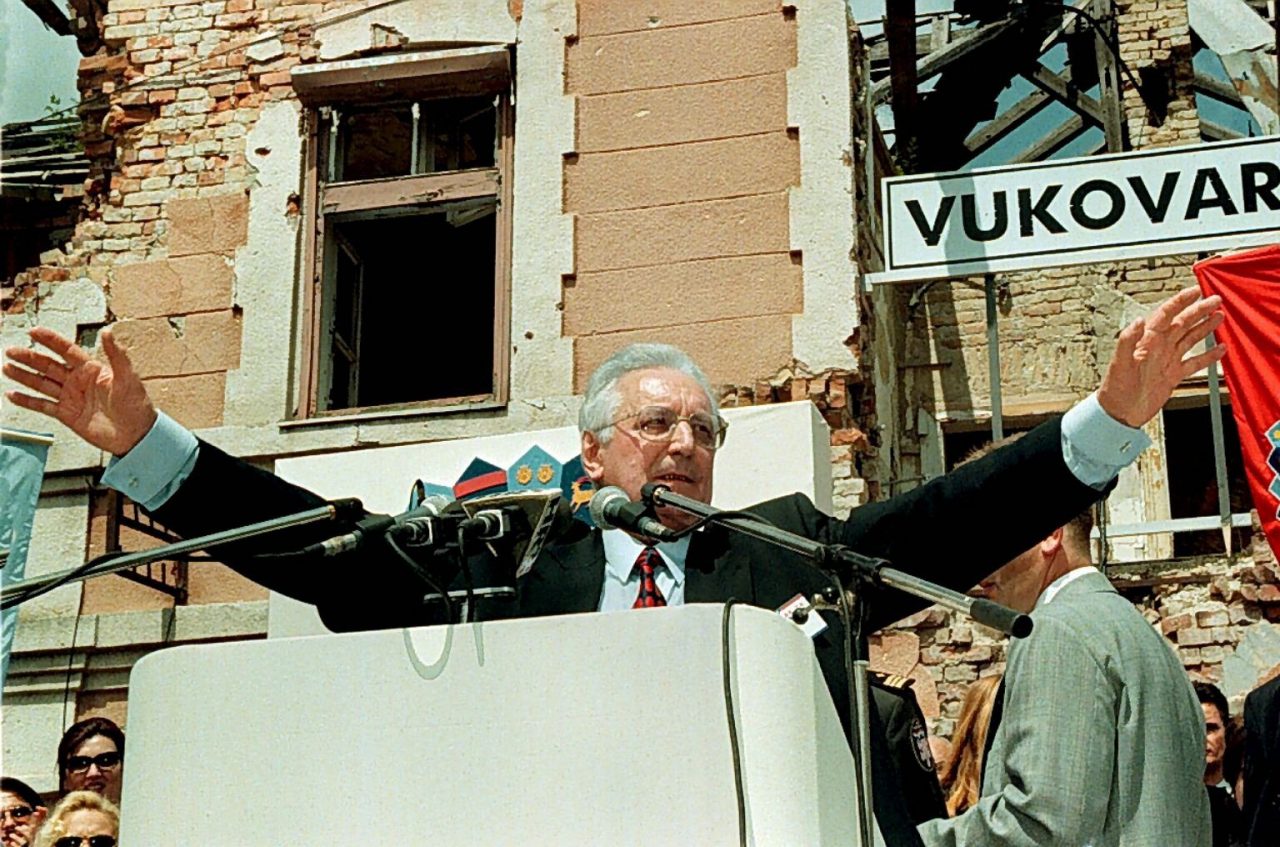 Croatian President Franjo Tudjman said in 1995 during the final months of the war that he agreed with the “radical” view that if someone had left the country because of the war and did not return for “a month or three months”, their property should be reclassified as state property.

Croatian President Franjo Tudjman said in 1995 during the final months of the war that he agreed with the “radical” view that if someone had left the country because of the war and did not return for “a month or three months”, their property should be reclassified as state property.

Tudjman’s statement was a response to international pressure to amend a law that restricted the return of property to Serbs who had been expelled or fled the country after the Croatian military’s Operation Storm in August that year.

Research in the archives of the International Criminal Tribunal for the Former Yugoslavia, ICTY, reveals many more examples of how economic violence – actions that cause economic harm – was committed on a widespread basis during the 1990s conflicts in many different locations, and how it financed and sustained armed groups, thus ensuring that the conflicts could continue.

These insights call for a re-evaluation of the conflicts, as most cases at the ICTY and in domestic courts in the countries of the former Yugoslavia have focused on violations of civic and political rights, and only in some instances have addressed violations of economic rights.

As a consequence of this prosecutorial approach, the underlying war criminal networks that supported the war – war profiteers, organised crime gangs, illegal smugglers of gasoline, people, weapons and so on – remained invisible, even though their connections to political parties and elites that emerged during and after the conflict are well-known facts.

After Operation Storm, Croatia gave Serbs who lived in the country 90 days to make a property return claim, while at the same time imposing visa obstacles to ensure that they could not return and claim what was rightfully theirs.

“I wouldn’t give [them] anything. You have to give instructions to the customs that they shouldn’t let people without papers to cross the border,” Tudjman explained at the time.

There was massive appropriation of property after Operation Storm in 12 Croatian municipalities. Apart from money, jewellery and other valuables, vehicles, livestock, appliances, food and alcohol were stolen by members of Croatian military, police and Territorial Defence forces, and by civilians.

In the ICTY case against Croatian wartime generals Ante Gotovina, Ivan Cermak and Mladen Markac, prosecutors alleged that all of this was aimed at preventing Serbs from returning to their homes and ensuring that their property was reallocated to Croats.

The prosecution also claimed that political decisions by the Croatian government to reject peace agreements were motivated by objectives to not to return land and other property to expelled Serbs.

The unlawful appropriation of property during and after Operation Storm is a perfect example of the most prevalent from of economic violence during the wars in the former Yugoslavia.

It also showcases how violations of social and economic rights serve the financial and political purposes of conflict.

Land, houses, and other valuables serve as resources in a war economy are often exchanged and redistributed under forced or violent conditions. Control over the allocation of such resources provides extensive wealth and power for those in political and military leadership positions.

The ICTY addressed some forms of economic violence by prosecuting 61 individuals for unlawful appropriation of property as a breach of international humanitarian law.

It used various charges to prosecute these crimes, including crimes against humanity charges that recognised unlawful appropriation of property as a tool in expulsion and persecution campaigns.

In the cases concerning crimes committed in Bosnia and Herzegovina, the ICTY established that military, police and political authorities unlawfully appropriated property in 56 municipalities.

Armed groups often directly stole properties from victims during other criminal acts such as unlawful arrests and interrogations. Some civilians also had to pay armed groups in order to escape violence, torture or death.

The wartime authorities in Bosnia’s Serb-dominated Republika Srpska entity institutionalised practices of charging fees for items like transit passes and transport fares to people who wanted to leave their places of residence.

In the self-proclaimed Serbian Autonomous Region of Krajina in Croatia and in some municipalities in Bosnia and Herzegovina that were under the control of the Bosnian Serbs, non-Serbs had to renounce their property or exchange it for property in other parts of Bosnia or in neighbouring countries in order to obtain permission to leave the municipality.

In June 1992, Republika Srpska even established the Agency for Population Movement and Exchange of Material Wealth to manage relinquished property.

The theft of the private belongings of prisoners in camps and detention facilities was also a common occurrence. Although prisoners were stripped of all their money and valuables upon their arrival at detention sites, various methods of extortion, including threats to kill inmates’ children, were used to obtain other valuables.

During the trial of Bosnian Serb paramilitary commanders Milan and Sredoje Lukic at the ICTY, witnesses described how Milan Lukic and two other members of his unit came to a school that was being used as a detention centre in the Bosnian town of Visegrad and took all the small children outside.

Like the school incident, in the majority of instances, economic violence takes place in combination with other forms of human rights violations and serves a similar purpose to direct forms of physical violence, such as ethnic cleansing.

However, when mapped across all the ICTY prosecutions, the forms that economic violence takes can be seen to change over time. Dismissals from places of employment and targeted home interrogations and arrests by police and paramilitary groups occur during the earlier phases of the conflict, and are followed by severe violence and armed attacks.

Detention in prison camps, in most instances, took place over longer periods of time, and besides the theft of property, prisoners underwent starvation as a form of torture, and were often subjected to forms of forced labour and sexual enslavement. Prisoners were used for manual labour, such as digging trenches, burying the dead, cleaning or doing various types of construction work.

While the ICTY prosecution brought charges for sexual violence in 36 cases, acts of sexual violence can be found in almost all the ICTY’s cases. Witnesses described such abuses in their testimonies even when the accused was not charged with them.

Although conflict-related sexual violence presents a direct form of physical violence, the systematic and widespread nature of these crimes also points towards a material basis for such crimes. Testimonies about these crimes show that women were used to fulfil the sexual needs of men and as such provide ‘services’ under forced conditions and under threat.

Despite the recognition of forced prostitution and sexual enslavement as criminal acts, the economic nature of conflict-related sexual violence has yet to be seriously addressed by the law in theory and practice. 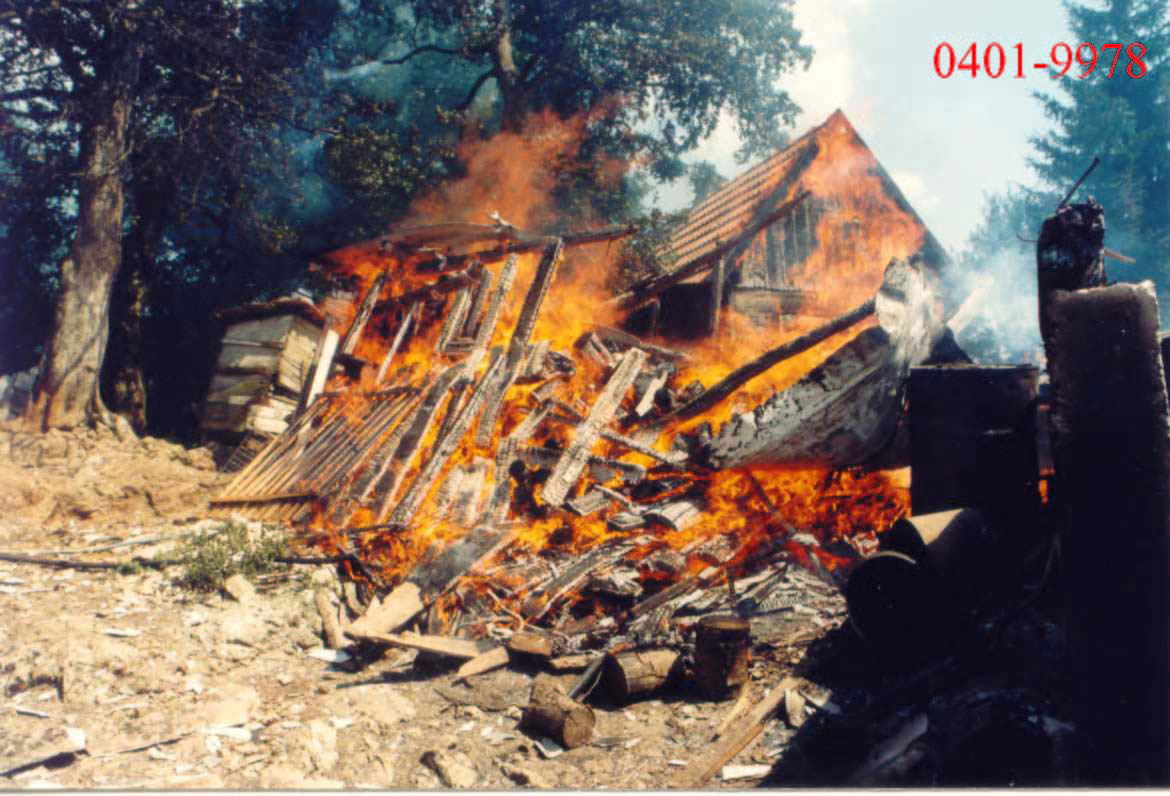 A photograph of a burning house during Croatia’s Operation Storm that was presented as prosecution evidence at the ICTY. Photo: ICTY.

Human trafficking – which is closely related to sexual enslavement in some of its forms – is another form of economic violence that was quite widespread during the conflict in former Yugoslavia.

Aside from the trafficking of women for sexual exploitation, refugees were smuggled across all borders. Trafficking extends also to weapons, ammunition, fuel, drugs and other goods, as it was a widespread practice by all wartime groups, although it went unaddressed by the ICTY prosecution.

Such crimes were often perpetrated by various formal and informal businesses, but not exclusively.

They ranged from illegal smuggling of goods to financial crimes, bribery, war profiteering and corruption – crimes that were committed in legal ‘grey areas’, meaning that it was not clear whether these activities were explicitly prohibited during the conflict, but were definitely unethical.

The Nuremberg trials of Nazi officials after World War II included several prosecutions of business leaders, and their connection to other forms of violence was clearly laid out. Such an approach was missing in the ICTY prosecutions, as well as in domestic cases in the countries of the former Yugoslavia.

This is not unusual, however, as war profiteers – although they make wars possible in the first place – are rarely held accountable anywhere.

War is a lucrative endeavour. It entails the production, mobilisation and allocation of economic resources to sustain a conflict.

Moreover, some of the causes for conflict are economic as well – both the direct acquisition of wealth and control over material resources and services, which is transformed into political power.

Despite not offering comprehensive material for such analysis – as economic violence was not its focus – the documentation gathered by the ICTY prosecutor’s office nevertheless confirms the pervasiveness of economic violence during the 1990s conflicts in combination with violations of civil and political rights, such as murder, rape or torture.

The economic nature of the conflict in the former Yugoslavia also illuminates the emergence of criminal groups and their connections to political elites, illegal trafficking and smuggling networks and war profiteering, as well as how they caused socio-economic damage to the civilian population.

Unfortunately, these issues remain a blind spot for transitional justice in the former Yugoslav region and continue to plague countries across the Balkans.

Elma Demir is a director and co-founder of the Association for Research and Social Innovation ADT in Sarajevo, Bosnia and Herzegovina. This article is a summary of a research report that she produced in cooperation with BIRN. The full research report will be published in academic journals in 2021.

The research for this article and the academic study was supported by the BIRN’s Balkan Transitional Justice grant scheme (January-December 2020), supported by the Matra Regional Rule of Law Programme. Part of the research was conducted as part of the projects ‘Gender of Justice: The Prosecution of Sexual Violence in Armed Conflict’ and ‘TRANSFORM: Transforming Gender Justice for Conflict-Related Sexual Violence’, implemented by Goldsmiths College, University of London, under the lead of Dr. Kirsten Campbell, Principal Investigator, and supported by European Research Council Grants No. 313626 (2013-2017) and No. 737515 (2017-2019).

Russia’s Invasion of Ukraine has directly affected Companies from BiH

Employer’s associations in BiH warn of economic consequences of political…