The latest report from the international rights watchdog says governments in the region used the pandemic to tighten controls over justice systems, curtail freedoms and further discriminate against marginalised communities.

The COVID-19 pandemic saw an increase in state control over the judiciary and media and further endangered minorities that already suffer from discrimination in Central and Southeast Europe, rights watchdog Amnesty International said in its annual report published on Monday.

Amnesty Secretary General Agnes Callamard said in a press release: “COVID-19 has brutally exposed and deepened inequality both within and between countries, and highlighted the staggering disregard our leaders have for our shared humanity.”

The report, “The State of the World’s Human Rights”, which covers 149 countries, says governments “took insufficient measures to protect journalists and whistle-blowers, including health workers, at times targeting those who criticized government responses to COVID-19”.

This occurred in multiple countries, among them Albania, Bosnia and Herzegovina, Hungary, Kosovo, Poland, Serbia and Turkey.

Most Central European and SEE countries struggled with media freedom, and investigative journalists in Kosovo, including those from BIRN, faced threats, slurs and attacks, the report recalled.

“In June, the former Minister of European Integration opened a defamation suit against Jeta Xharra, director of the Balkan Investigative Reporting Network, KALLXO.com and Prishtina Insight. In July, Xharra was threatened by another former minister, and in September, former Prime Minister Ramush Haradinaj called journalists ‘mercenaries’,” the report noted.

In North Macedonia, “employers failed to implement COVID-19- related measures to assist working parents, disproportionately affecting women, some of whom had their wages unlawfully reduced if they took time off”.

In Moldova, the report added, “measures enacted to confront the COVID-19 pandemic resulted in the reduction of some other medical provisions and the temporary suspension of non-emergency services”.

The pandemic severely affected care home residents in Slovenia, “accounting for almost 60 per cent of all COVID-19 deaths”, it said.

In Turkey, “the judicial harassment of individuals such as journalists, politicians, activists, social media users and human rights defenders for their real or perceived dissent continued”, it wrote.

“Legal amendments introduced in the context of COVID-19 excluded from early release individuals who had been unjustly convicted under anti-terrorism laws and those held in pre-trial detention.” 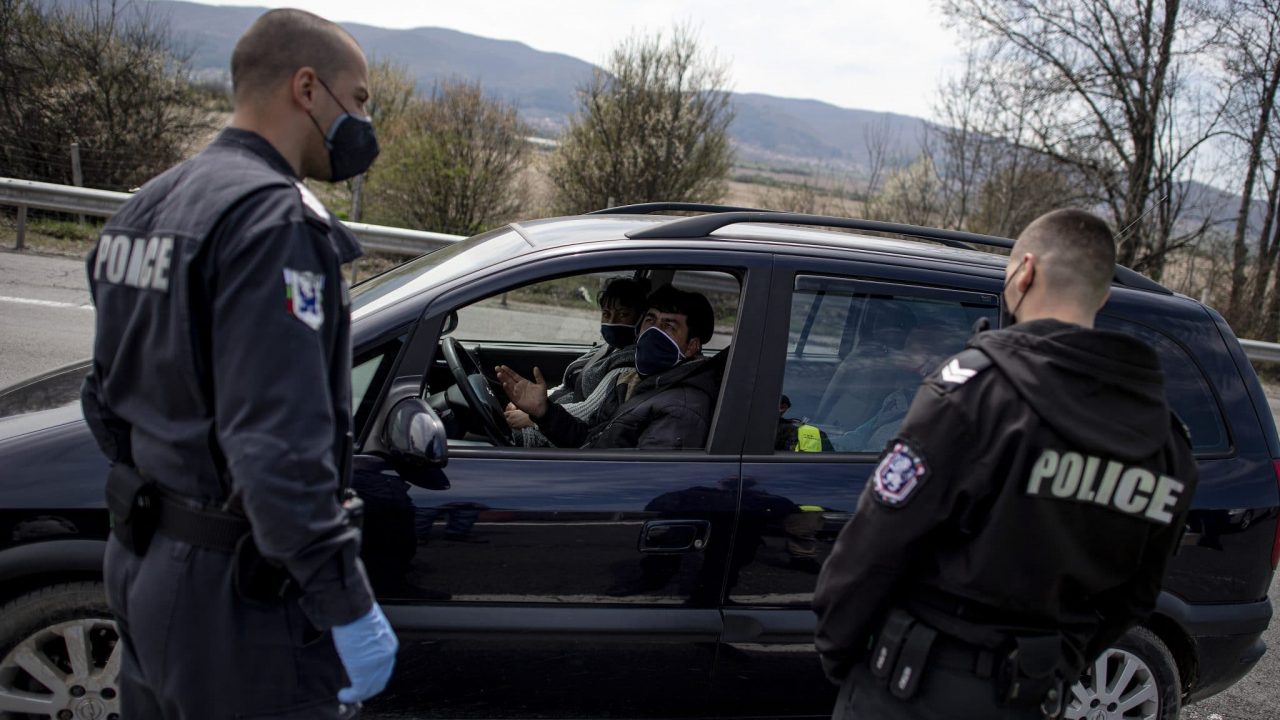 Bulgarian police check documents at a checkpoint on the highway near Sofia in April 2020, in the pandemic. Photo: EPA-EFE/VASSIL DONEV

Roma and people on the move, such as refugees and asylum-seekers, endured discriminatory “forced quarantines” in Bulgaria, Greece, Hungary, Serbia and Slovakia.

In Bulgaria, the report said, “the COVID-19 pandemic and nationwide lockdown exacerbated the already widespread discrimination against Roma”.

“In Burgas municipality, the authorities used drones with thermal sensors to take the temperature of residents in Roma settlements remotely and monitor their movements. In the town of Yambol, the authorities used planes to ‘disinfect’ the Roma neighbourhood which had registered COVID-19 infections. Such measures were only applied to Roma communities,” the report observed.

When it comes to asylum seekers and refugees, many countries tried to stop them from entering or to further curb their rights. In Croatia, the report said, “aid organizations documented over 15,000 cases of pushbacks and collective expulsions, often accompanied by violence and abuse.

Bosnia and Herzegovina, it said, “failed to provide effective access to asylum and adequate reception conditions for thousands of migrants and asylum-seekers travelling through the country on their way to the EU”.

Amnesty also said that during the pandemic, Serbia, Bosnia, Kosovo and Montenegro relaxed efforts to prosecute and punish perpetrators of war crimes committed in the wars of the 1990s.

“Serbia failed to indict any former senior police or military commanders for war crimes and resolution of the fate of missing persons stalled,” it pointed out.

The report noted that “the EU continued to struggle to address the ongoing erosion of the rule of law in Hungary and Poland, although it activated proceedings against the two states for risking a serious breach of the union’s core values”.

When it comes to the Czech Republic, the report noted concerns that “that continued arms transfers to the Saudi Arabia/United Arab Emirates-led coalition could be used to commit or facilitate serious violations of international human rights and humanitarian law in the Yemen conflict”.