General Soleimani is being assassinated on social media - Balkan Times 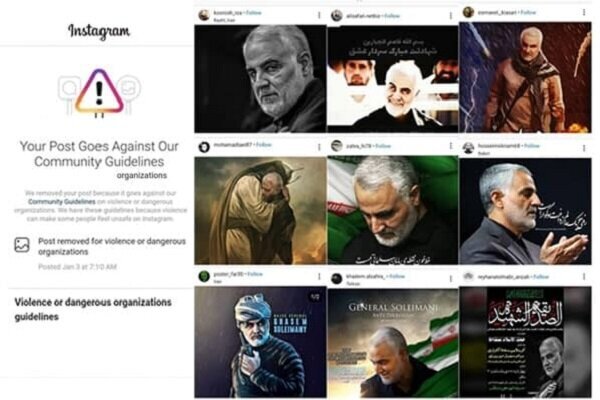 General Soleimani is being assassinated on social media

In a gross violation of freedom of expression, Instagram and other American social media platforms have moved to censor media content related to a top Iranian general who was assassinated by the United States last year.

This week as people all across the region prepared to commemorate the first martyrdom anniversary of the commander of Iran’s elite Quds Force, General Qassem Soleimani, some American social media platforms threw away their guidelines to uphold respect for freedom of expression, and heavily censored media materials related to the senior Iranian general.

Instagram was at the forefront of boycotting these materials. First of all, it moved to delete posts that include pictures of the general. But it gradually intensified its censorship operation, removing hashtags and even Stories that use the name of General Qassem Soleimani.

Instagram’s censorship against General Soleimani dates back to the early hours of his assassination. On January 3, 2020, the Iranian people woke up to the news that the highly respected general has been assassinated in an American drone strike near Baghdad’s international airport. The strike, which was ordered by U.S. President Donald Trump, caught tens of millions of people in the region by surprise as no one expected that the Americans would commit such an act of sheer folly when the Iranian general was on a diplomatic mission to de-escalate tensions between Iran and the U.S.

Within a few hours of the assassination of General Soleimani, there was an outpouring of emotions on social media apps, with millions of social media users, including those using Instagram, directing their anger at the White House. Instagram was all-prepared to extinguish this inferno of anger through what can be called a “blanket censorship,” as if it was informed of the U.S. decision to assassinate General Soleimani in advance. The censorship of Instagram was so widespread that if even included Iranian government officials who posted materials commemorating the assassination of the Quds Force commander.

Some Iranian officials said at the time that Instagram had launched its campaign against General Soleimani under the pressure of the U.S. government. The U.S. government’s move to put pressure on companies to censor Lieutenant General Qassem Soleimani on social media is out of misery, Mohammad Javad Azari-Jahromi, minister of information and communications technology, noted in January 2020.

“America’s action shows its misfortune, as Iran is powerful on social media. The on-going presence of people on social networks with tens of millions of posts has echoed the U.S. terrorism in the world,” the Iranian minister asserted, vowing that he will take measures to counteract the U.S. censorship.

Instagram users in Iran have since castigated it for its discriminatory approach to events related to Iran, hoping that the American photo and video sharing social networking service would change its policy on the Iranian general.

But this January dashed Iranian users’ hope. As Iranian users of Instagram prepared to mark the first martyrdom anniversary of General Soleimani, Instagram once again showed that it is still complying with its controversial policy of muzzling any voice showing respect for the Iranian general.

This time, Instagram not only removed posts of ordinary users in Iran, but also deleted, and in some cases threatened to suspend, a number of accounts affiliated with some Iranian media outlets including the Tehran Times.

Over the past few days, Instagram brutally suppressed the voice of the Tehran Times, removing several posts and Stories published by its account. Instagram even threatened to suspend the account of the Tehran Times for sharing media materials on General Soleimani, a move that constitutes a flagrant violation of freedom of expression. The Tehran Times has every right to ask Instagram that why it is applying dual standards in its policy toward freedom of expression, removing General Soleimani-related media materials produced by Iranian news organizations while refusing to remove similar materials produced by Western media outlets.

This behavior of Instagram prompted some Iranian officials to seriously consider it to be a tool of the U.S. government. Head of Iran’s Civil Defense Organization Brigadier General Gholamreza Jalali on Sunday described Instagram as “a new colonial tool” of the U.S.

“We hold the first anniversary of the great martyr at a time when the new colonial and virtual tools of America such as Instagram are afraid of even publishing the pictures of Soleimani,” Jalali said in a message released on Saturday, ahead of the anniversary of Lieutenant General Soleimani’s martyrdom.

The censorship campaign against the top general was not limited to Instagram but also its parent company Facebook, both of which did not even try to whitewash their anti-freedom campaign.

A Facebook spokesperson admitted in a mid-January 2020 statement to CNN that Instagram and its parent company Facebook are removing posts that voice support for General Soleimani to comply with U.S. sanctions.

On Monday, Facebook removed the Tehran Times’ posts commemorating the general, shortly after they were posted. Facebook went so further as to suspend the Tehran Times’ account for a month, threatening to remove the account afterward. YouTube also followed in the footsteps of Instagram and Facebook, launching a censorship campaign to remove videos showing support for General Soleimani. These social media platforms have been busy removing posts related to General Soleimani since he was assassinated last year, and they continue to do so, in what appears to be a violation of freedom of expression.