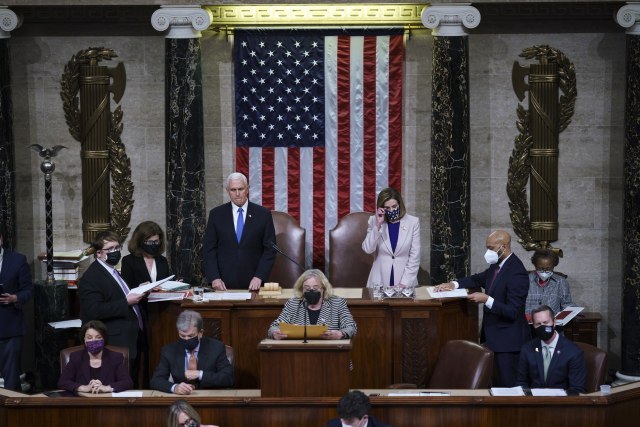 The new President of the United States is Joe Biden, after the Congress confirmed the electoral votes today, CNN reported.

Former US President Donald Trump spoke on the occasion of the decision of the Congress.

He stated that the transfer of power after January 20 will be in accordance with the regulations.

“Although I do not agree with the outcome of the election, there will still be an orderly and peaceful transfer of power on January 20,” Trump said in a statement, repeating false allegations of election fraud over the past two months.

“I have always said that we will continue our struggle to ensure that only legal votes are counted. Although this represents the end of the largest first term in presidential history, it is only the beginning of our struggle to make America great again,” he said.

After the break due to the riots caused by the supporters of the incumbent president Donald Trump on Capitol Hill yesterday, the members of the Speaker of the House and the Senate returned to the Congress and continued counting the votes.

Vermont’s electoral vote is officially counted, and it has been confirmed that Joe Biden and Kamala Harris officially pass the threshold to win the electoral college,

Objections to the vote of Georgia and Pennsylvania for Biden were rejected.

Republicans opposed election votes in Arizona, Nevada and Michigan, but the proposals failed before they could be debated.

Despite the claims of Trump and his associates, there was no widespread election fraud, which was confirmed by numerous officials and the former Minister of Justice, William Barr, according to the AP.

Neither Trump nor members of Congress who objected to the votes of the electorate provided credible evidence that would change the outcome of the election. Ahead of the session yesterday, Trump asked Pence to reject the votes of voters in key federal states, as the chairman of a special session of the Congress.

Pence, however, opposed his boss, saying that he did not have such authority and that “the oath to defend the US Constitution prevents him from unilaterally deciding which votes of the electorate should be counted and which should not.”

The session of the Congress was interrupted around 20:00 Central European Time, after Trump’s supporters stormed the parliament building after protests due to the election results and the conflict with the police.

Police expelled Trump supporters from the Congress complex after four hours of violence, and the session continued last night at around 2:00.

During the violence of Trump’s supporters, four people were killed in the Congress, and considerable material damage was done. With a six-hour break, the session of the US Congress lasted for about 15 hours.

That special session of the Congress, at which the result of the presidential elections is confirmed, lasted 41 minutes in 2017, and 23 minutes in 2013.